I was able to test out the Yongnuo YN686EX-RT Flash recently at a photo shoot.  I wanted to put it in a real world test.  Of course I had my backup flashes just in case things went south with this model.  My shoot would be in morning sun so  I knew I would be putting it to use.

How was the quality?  How did it hold up?  Did I run into any issues or did this flash deliver where expected? Let’s get into it. 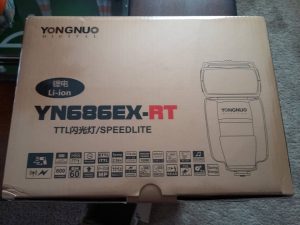 I received a nice gold colored box the other week.  It was a decent size with some weight so I knew they shipped the Lithium battery with it. (The warning label on the shipping box also gave it away).  The box  contained a case, Speedlite, Lithium Battery,  Battery Charger and a flash stand.   I was truly excited just to have a rechargeable battery and not have to worry about carrying extra batteries or buying new ones. I also liked that it had a port to upgrade firmware. 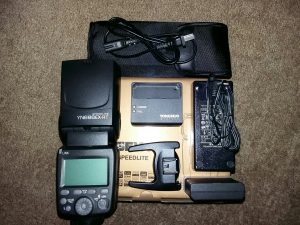 Now, that unveiling was out of the way let’s get some information.

Battery Charge/Life:  While I didn’t watch every second the battery was charging, I believe it charged in about 45 minutes or so.  I didn’t even attempt to power the flash on without charging it first.  Since then.. through testing.. through the shoot and having a friend try it out for a day, roughly  through today it has only dropped one bar. (~23days).  The shoot was roughly 300 shots (not all flash) ranging from Full power to 128th power.   Supposedly one full battery charge will give you up to 750  full power flash’s  with a  1.5 second recycle time.  I have confirmed the 1.5 second recycle time which is fantastic even off camera as having to wait 10 seconds can feel like forever and break the objects concentration.  As for the amount of full power flashes, I have not fully tested that part yet but based on what I have shot so far, 750 is not impossible.

Zoom: Like others, this has a zoom range of 20-200mm.  With the panel/diffuser down, it will set to a wide 14mm.  It can do Auto or Manual zoom.  Due to the location we were at and the sun and backdrop, left it mainly at 14mm to spread the light which worked very well.

Favorite Features:  It pretty much has all of the features you would expect.  Groups, channel settings, power settings, ETTL/ETTL II  Linking, Zoom (M or A), Overheat indicator and sound indicators.  I personally like the Zoom, Indicators, and of course the Lithium battery power.  I had no issues with ETTL /ETTL II communication.  It worked just as I expected it to.

So how did it do in real world settings?  Actually of my 3 flashes (NW-561, NW600EX-RT and YN686EX-RT),  this is my favorite.  Obviously the NW-561 can’t be compared as it is just a manual flash that works well off camera for simple setups but for more complicated environments, the 686 did exceptionally well.  This is not to take away from Neewer’s 600EX-RT.  That also worked exceptionally well; however, it was more complicated to figure out..  it doesn’t have a Lithium option and the quality feel isn’t as good.  I would say my biggest complaint on the NW600EX-RT is that it is not as user friendly and the battery drain is hard to deal with.  The results are just as pleasing so if you can get past the other things, you can get it for around $99.  I also like that my Neewer triggers worked without issue on this flash. 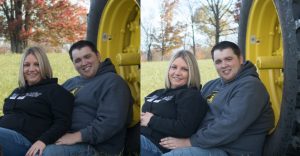 I brought this flash to test out while on a shoot.  These are a couple of test shots I took for this example.  While they are two different shots, they were in the same spot within seconds of each other.  The left is without the flash and the right is with the flash. Both samples are RAW unedited.  I only cropped them to give an idea of the subtle change in the objects.

Now what did I not like or what was I disappointed in?

So far this has not disappointed. I’ll update below on any new findings I have as I continue to use this as my primary flash.

Feel free to ask questions, give your own opinion and hopefully enjoy some photos.